Paradists worldwide celebrated the end of labor on May 1st by supporting the Paradism Movement with colorful events. 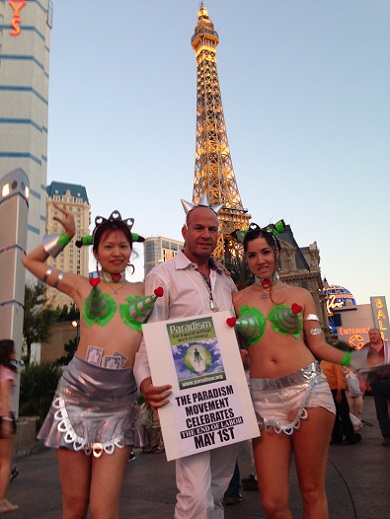 End of labor being celebrated in Las Vegas.

Kelvin tells us: "We showed our creative and eye catching signs to the passerby’s. We handed out flyers that artistically resembled money. And we had lots of fun doing it. Speaking of eye catching! The public couldn.t help but to stop and gaze at our very sexy dressed robots ;) The beautiful costumes were a big hit!" 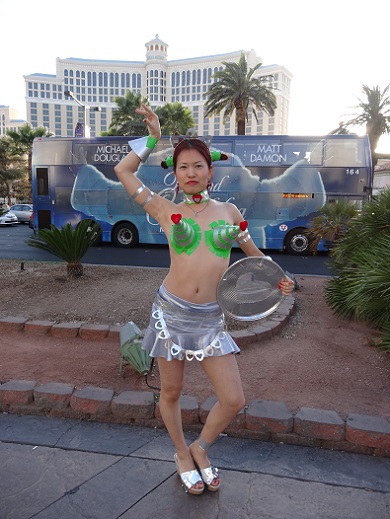 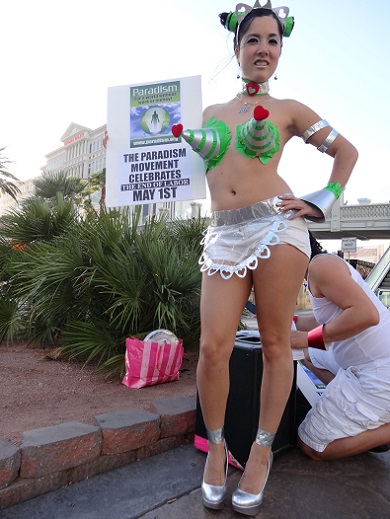 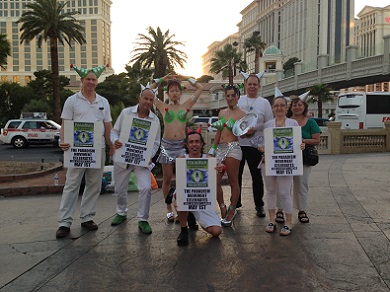 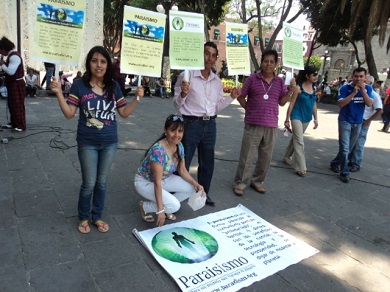 "Leveraging the fact that on the 1st of May many people celebrate Labor Day, the Raelians from Puebla went out on the streets to promote the world Paradism Day . We were impressed how many young people no longer want to work, mostly students who already are using science and technology. We talked with a young man who studies physics and he told us that it is time that all governments of the world give a chance to the geniuses to achieve Paradism, that today it is an utopia, but in a short time it can become a reality, since geniuses always seek benefits for everyone. He asked us to send him more information about Paradism and Geniocracy to his email so that he can promote it among his fellows at university. 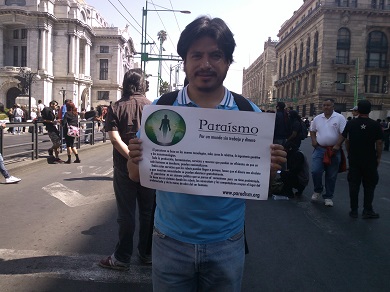 We also talked with a union leader who was promoting the rights of dissatisfied workers and was surprised when he saw our banner that said 'Paradism, a world without money or work'. We explained him the benefits of this system of government and he said that it was very difficult to achieve this system but he supports it. It was the first time that he heard of Paradism but if people start to understand the magnitude of our work, certainly we are going to achieve that all can become happy. He added that he was ashamed to tell us that he promoted work and dignified treatment of workers and that would be better to 'Take advantage of science and technology, not work and be happy'. He was a very kind person who all the time gifted us with a smile." 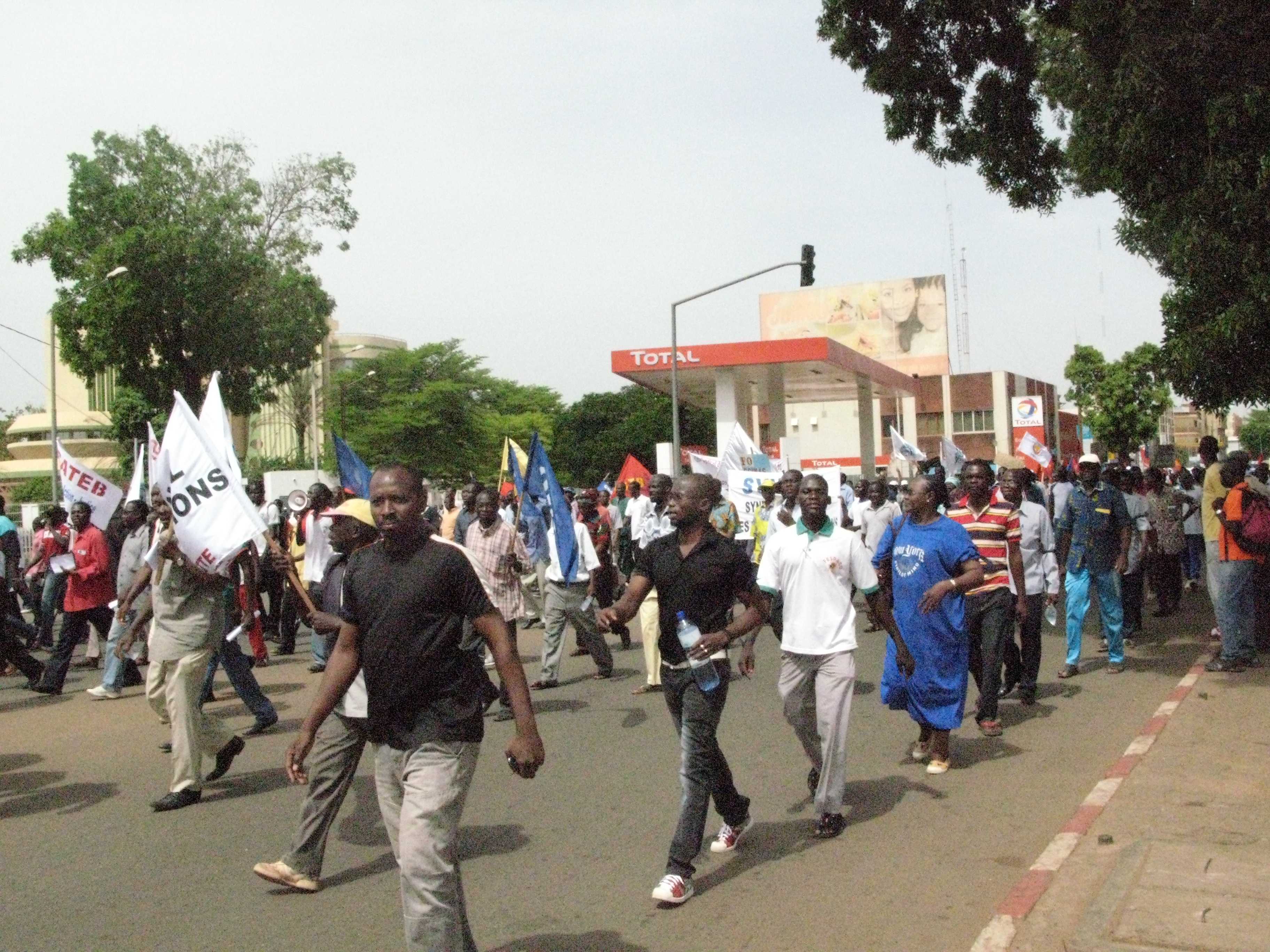 The celebration of May 1 in Kama (Africa) has been a wonderfull experience for many. In some countries like Burkina Faso and Cote d'Ivoire (Ivory Coast) actions such as demonstrations with the paradism banner, distribution of flyers, meetings with the workers groups, live interview at the radio, sending of the press release to the media were carried with enthusiasm. More people have now started to talk about paradism seriously and while some are seeing it as something which cannot happen now, others are hopefull and are considering it as a possibility in their lifetime. In Burkina Faso for exemple, the president of workers union wants to meet us and talk more seriously about paradism. 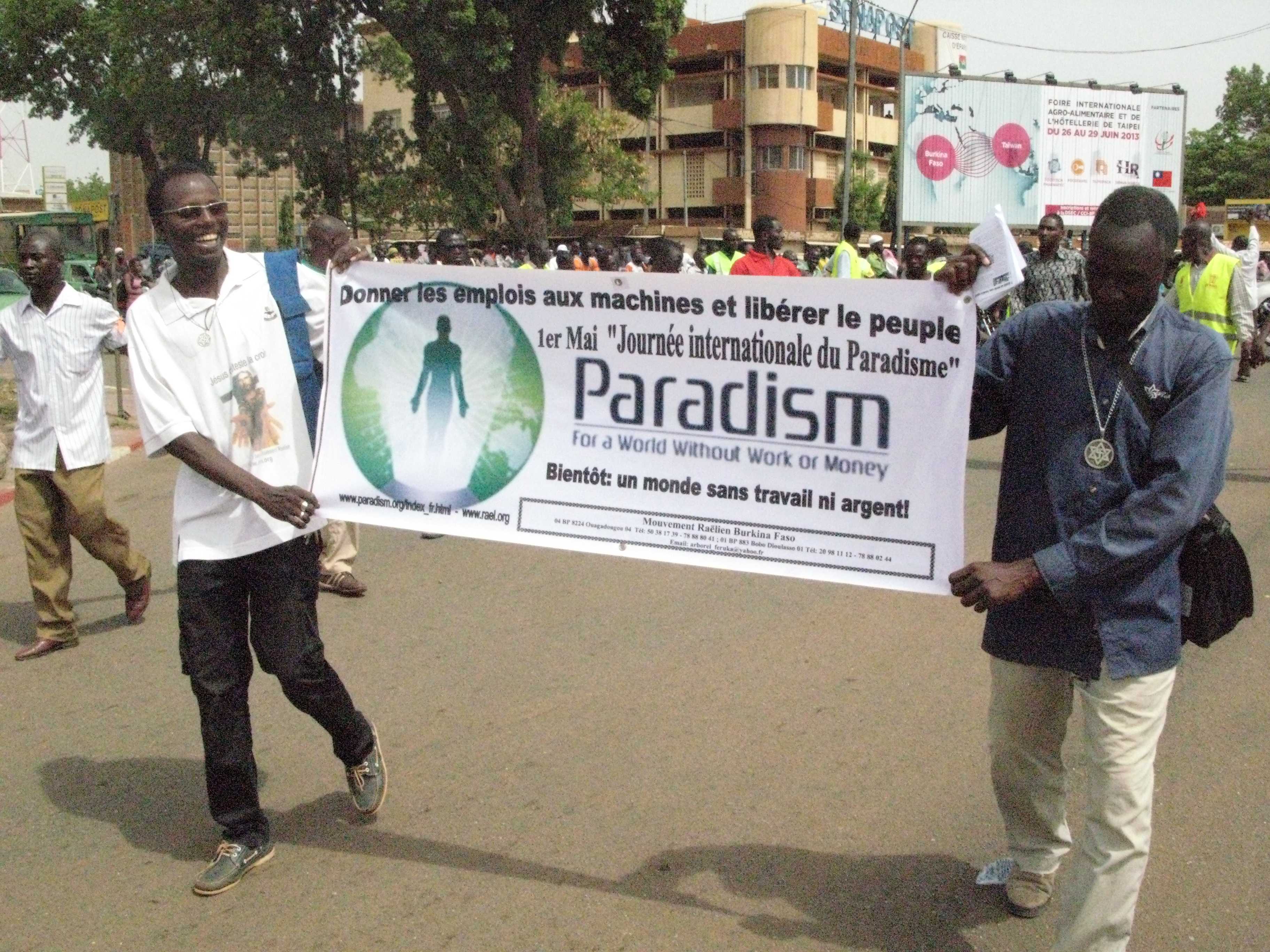 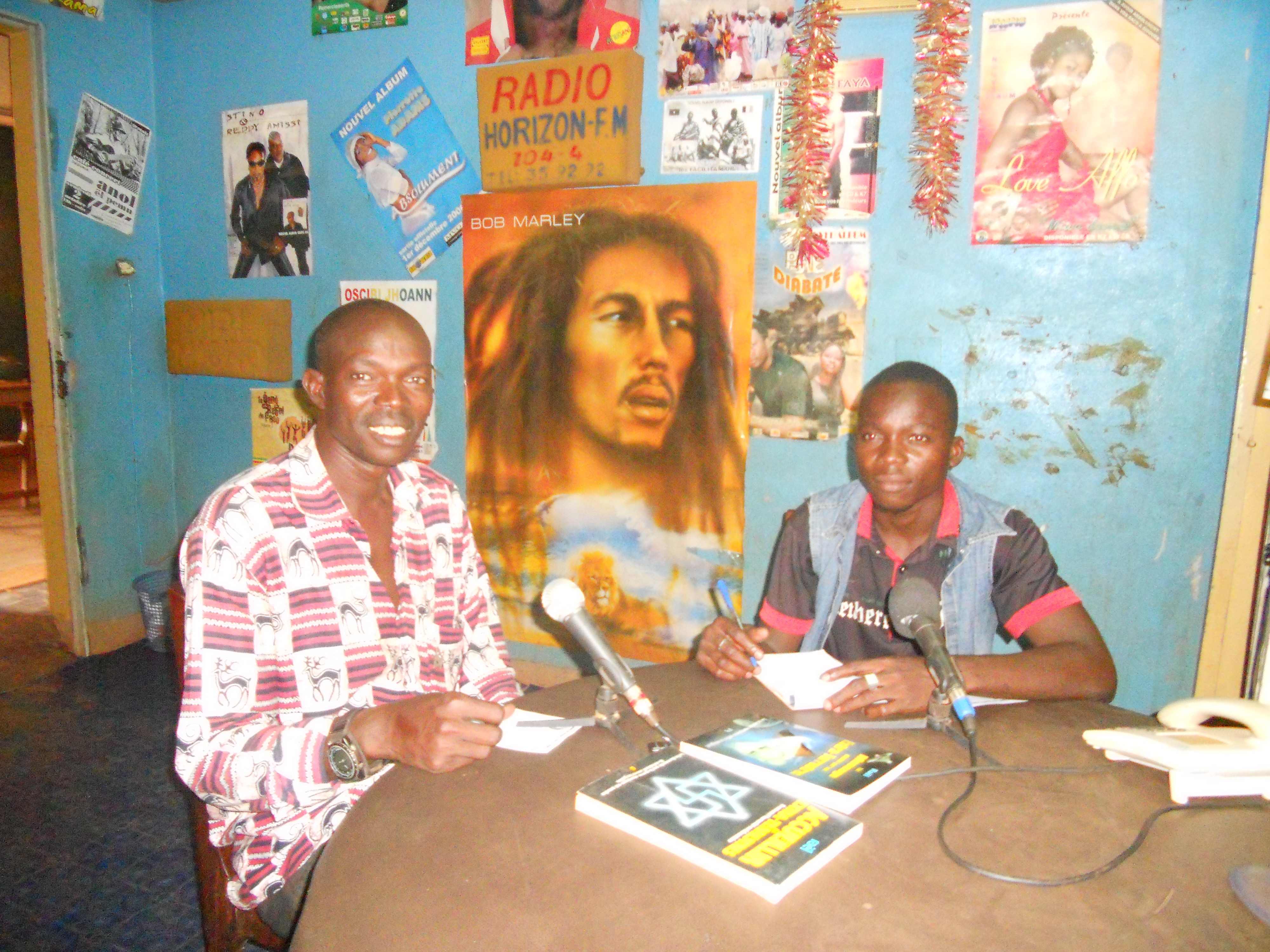 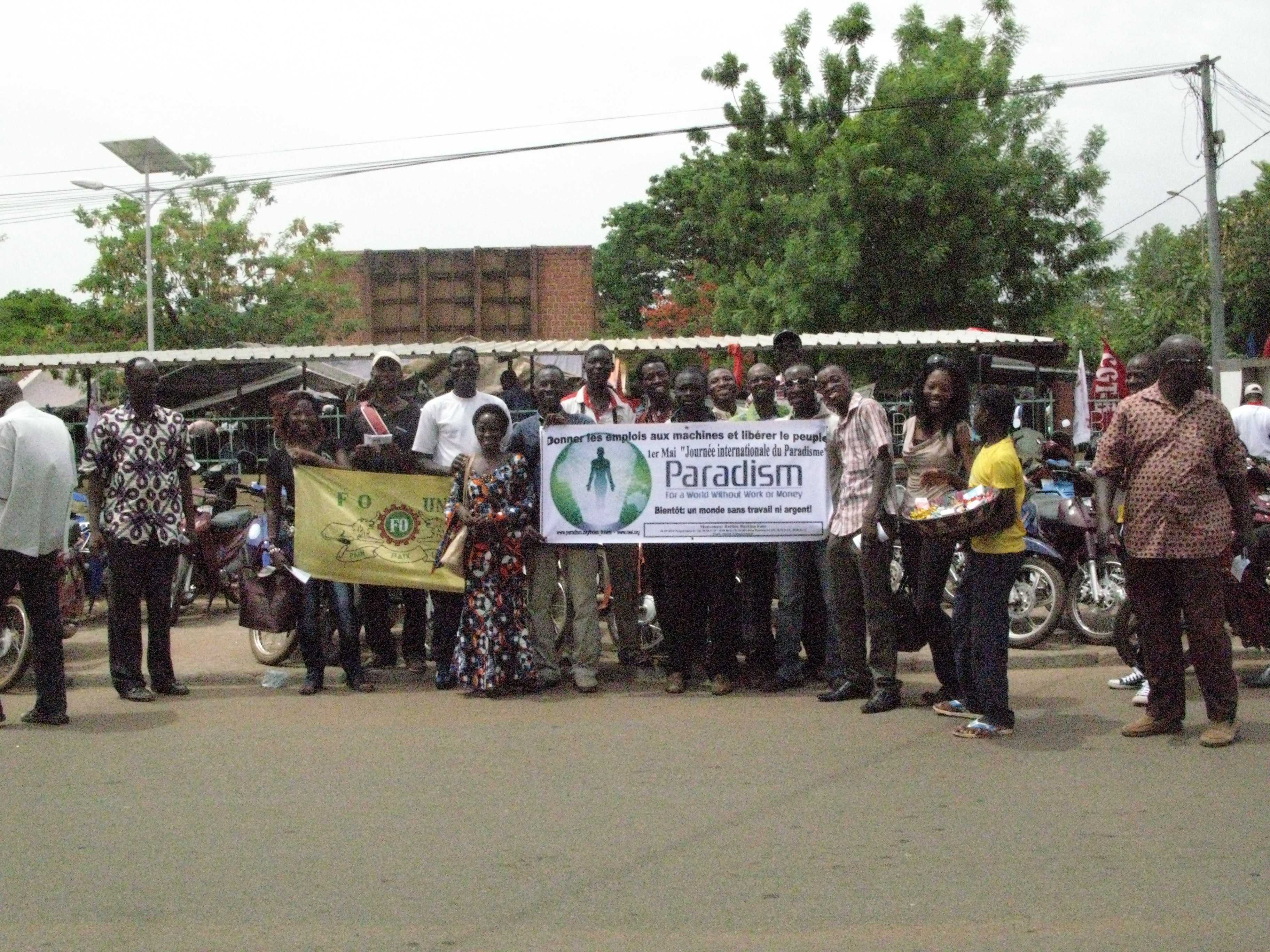 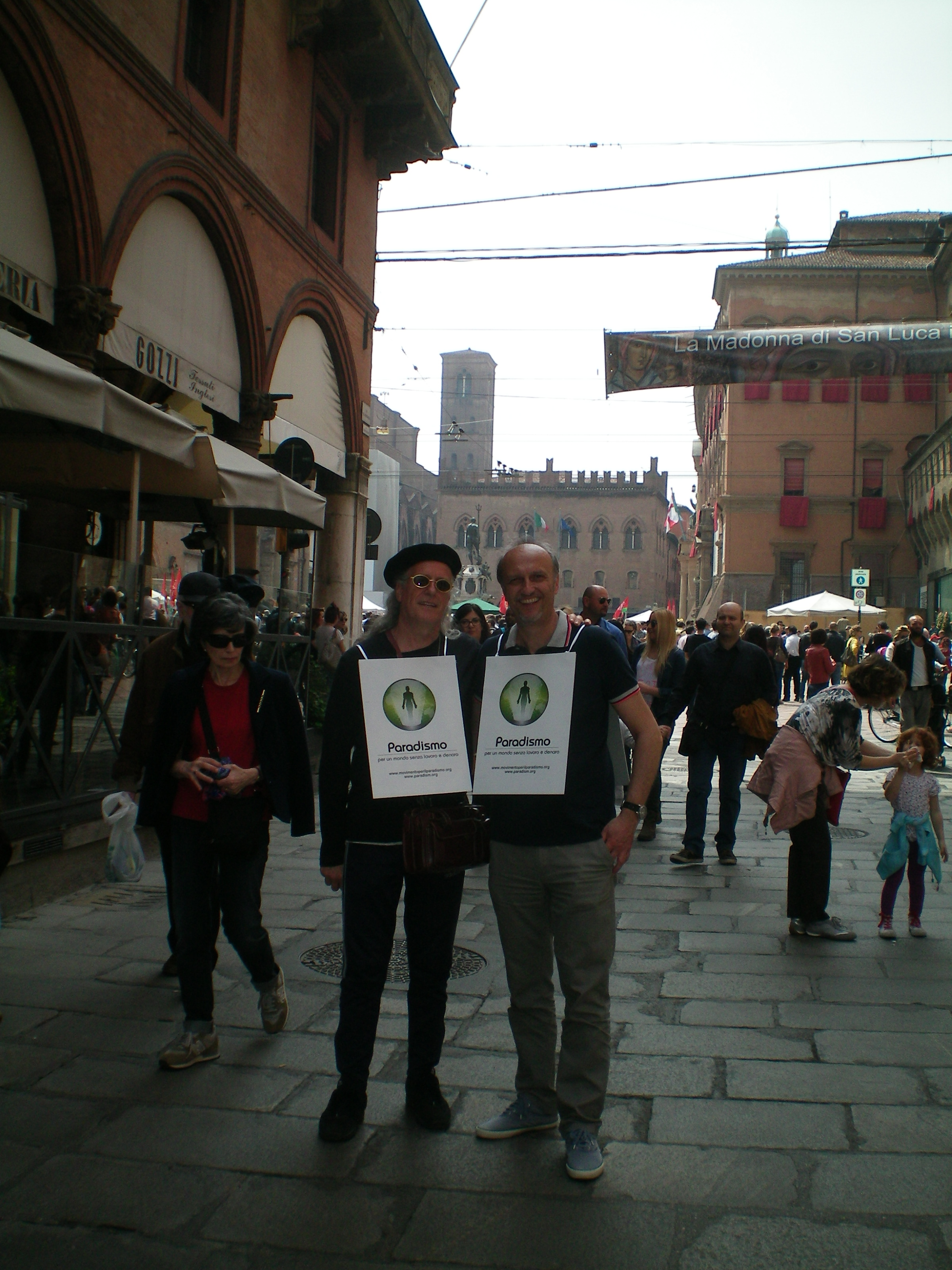 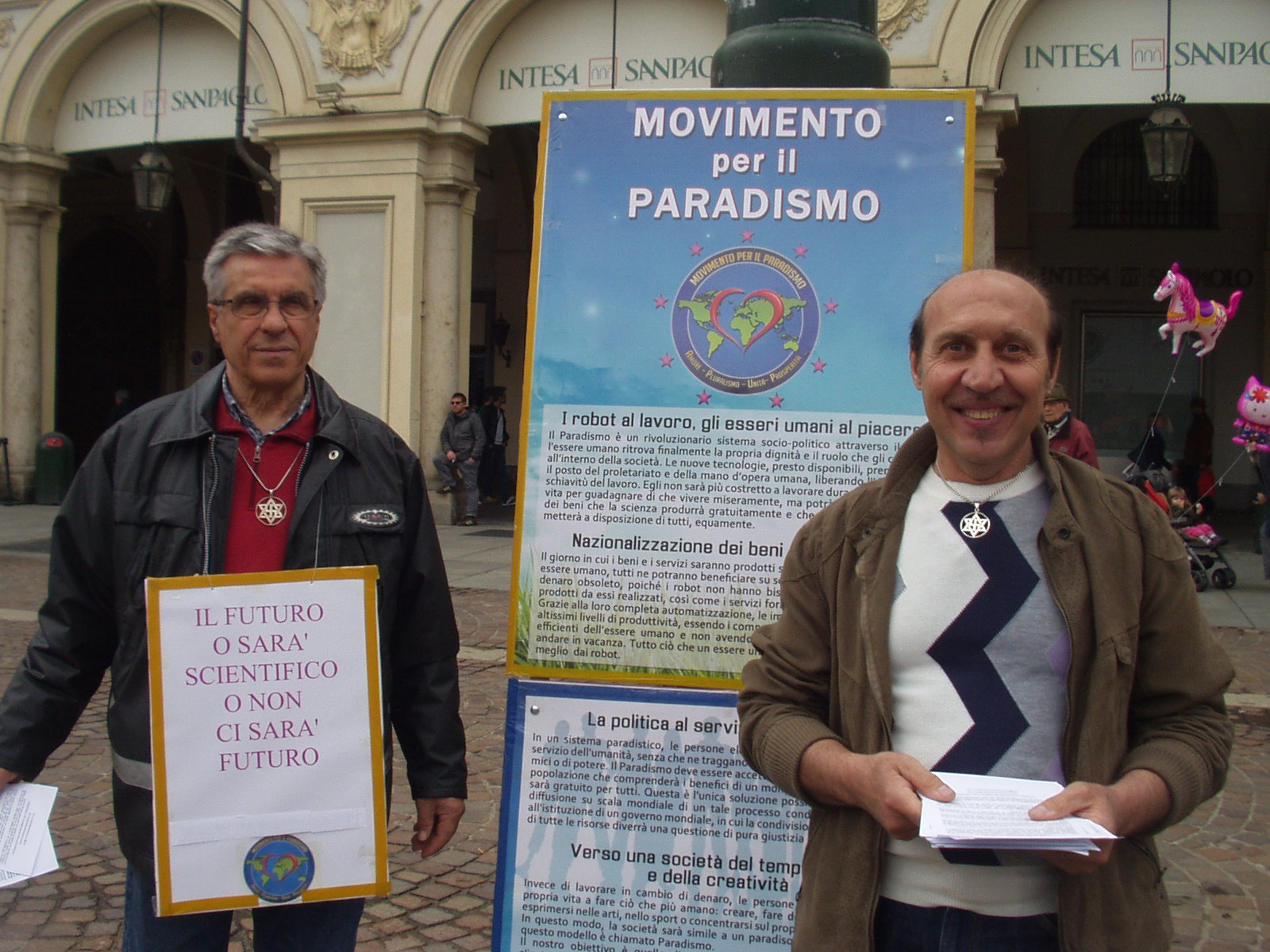 Everyone loves the paradism project, considering the current time, but not the old people - they struggled a lifetime to obtain their little privileges (retirement, a house) and are not ready to adjust or abandon their small privileged position. Their problem is that they are unable to look ahead and think about the younger generation. For them the world must remain like that (selfishness). How can we blame them, they are the victims of this system of enslavement... !

An amusing detail, a person wrote on Facebook that we already live in paradism, because we are already out of work and have no money :-) 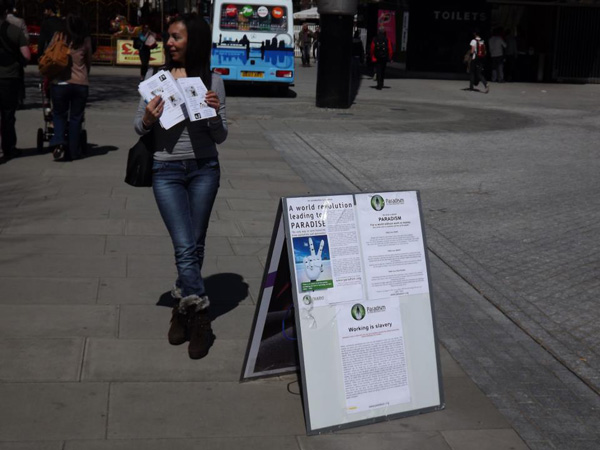 Yesterday in London, Andreas and myself were diffusing among South Bank close to the river where 100 of people walk by everyday, most of all tourist, we were lucky as the weather was shining.

150 Leaflets were given to people in the street, we had a very good interaction, 2 police officers were walking by when they ask me what I was doing, I just gave them a leaflet, they smile to me and one of them said “I Lov the idea and keep doing a good job” I thought wowwwwwwww, was he being serious ? if so, let us keep dreaming, as we know that the biggest invention ever in technology was once made by someone, who has a dream and make it true, for example and in that case, creating robots for them to do Humans work ...

Andreas and myself collect 5 email addresses, where more infos about our next event will be sent to...

For your info, May 1st in London, UK isn't really a Labor Day cause most of people works but in fact, the following Monday the 6th which is a bank holiday here, people would not work on that day ...

Andreas and myself enjoyed the diffusion very much and we are looking forward for the next one. 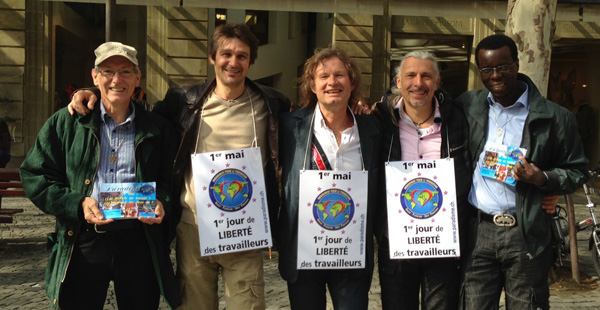 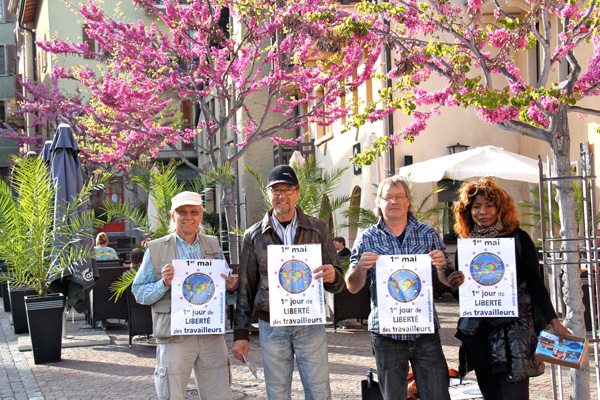 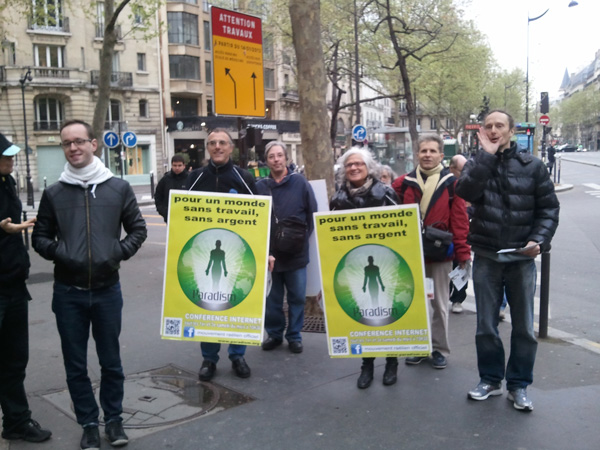 The French provinces have been spreading Paradism this first May 67 AH (2013).
This is a first in Europe. In France, as in Italy and Switzerland, paradism took his place within the rallies of May Day.
In France, six regions participated in the spreading of the party of free time and the end of work and money.
Indeed, in Montpellier, a person, Françoise D, gave away for 3 hours fifty leaflets and enjoyed having many contacts. 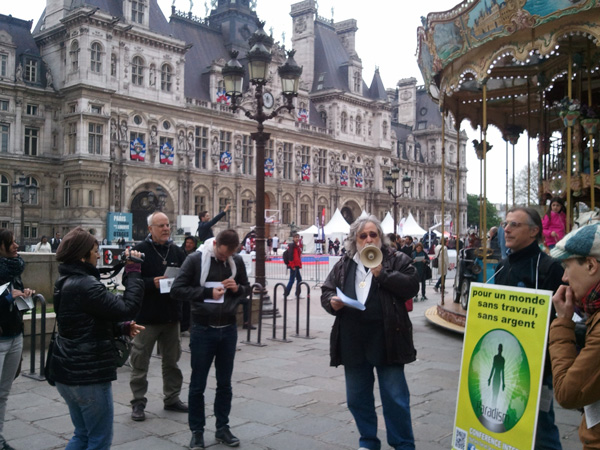 In Lyon, five people leaded by Osiris, attended and distributed some 300 to 400 leaflets.

In Metz, the brilliant team with 6 people and conducted by Kimbangu, distributed about 400 leaflets and had the good fortune to speak with many people on paradism. The team was delighted.
In the west, some good news with Pierre S and Jean-Louis R who contacted about 200 people with leaflets. 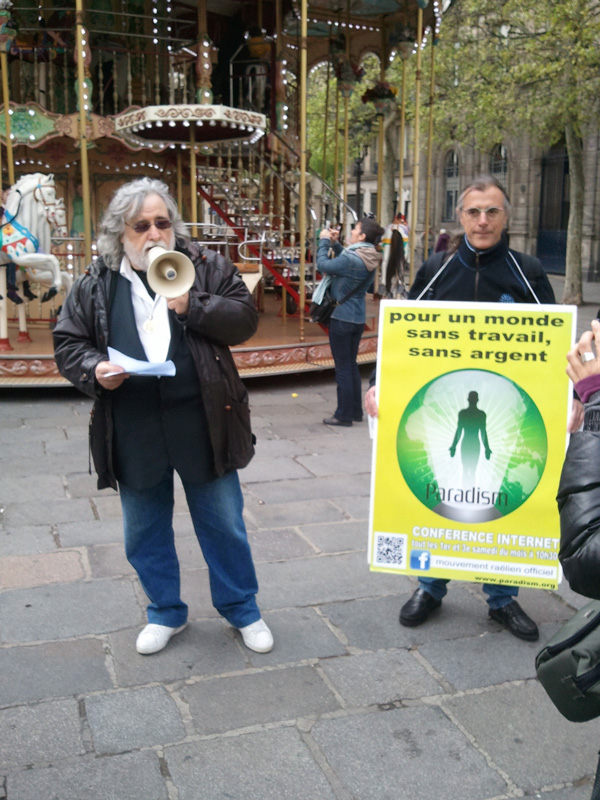 In Bordeaux, five people led by Marc, had a nice spreading and enjoyed a 2 hours sunshine between two showers.

The team of Paris organized a march of 4 km, with 17 people, led by Jean Pierre and Michel, with signs and leaflets. They started in St Michel Odeon, bd St Germain, Boulevard St Michel. Then Place Maubert, passing in front of Notre-Dame, and then up the Town Hall where a speech was given with a megaphone by Jean Pierre. 400 leaflets were distributed, and we have published in a online Paris newspaper "Street press".

A few days before, the media team sent a press release to all the French media informing them of our actions and the content of the message: a society without work and money through the development of technology and science .
As the organizer of this event in France, in conjunction with those of Switzerland and Italy, I congratulate everyone for participating in this event that will be repeated every year until paradism is accepted in as many countries as possible.
Congratulations again to all. It is no more the time to celebrate work, but the free time to think, create and grow. 1,500 people got this message today.

For the 1st may diffusion we were in Mannheim and we were five people.
In Mannheim was a gathering from a labour union and we gave leaflets to the people and we had some nice discussions. Some of them want to look up on the internet for more information - we will see. 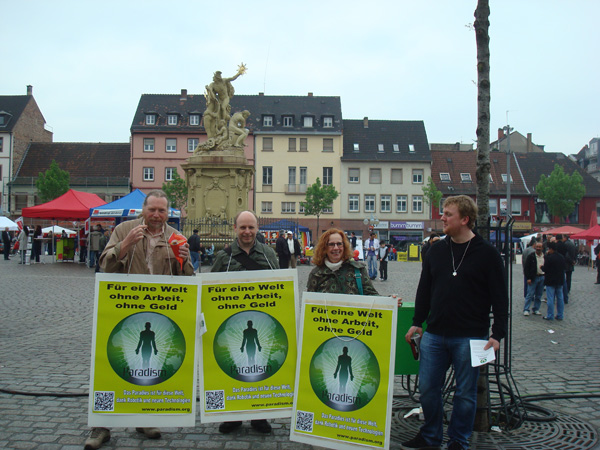 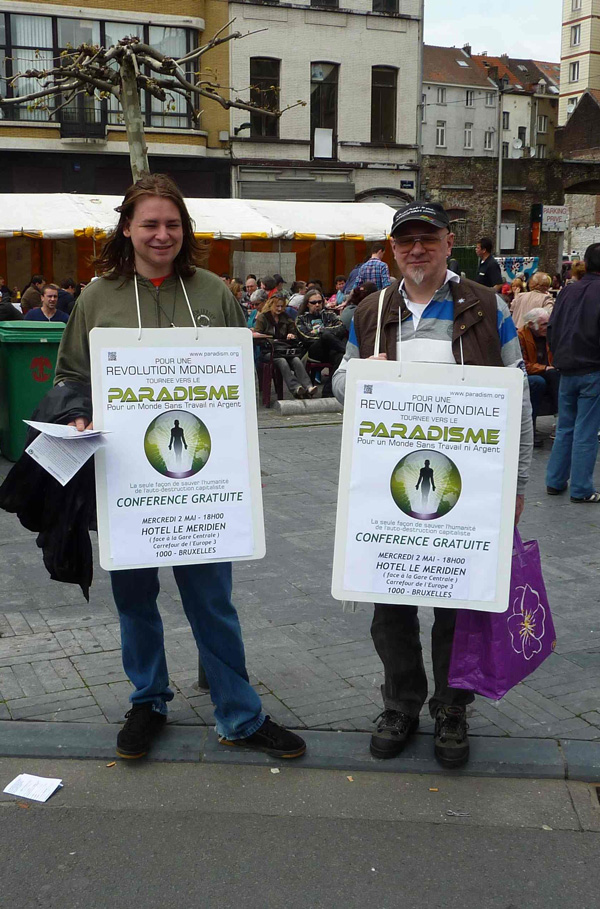 A letter was sent to all the 262 Bourgmestres in the Wallony part of Belgium (the French part).plus another 19 communities in the capital Brussels.
We didn’t have much expectation. Nevertheless we receive a warm reply from Paul Magnette, the Bourgmestre of Charleroi, one of the biggest town in the country, and the president of the socialist party. He has a PHD in political science and has taught in universities in Belgium and Paris.

400 leaflets were given out and we were thanked a lot for that. 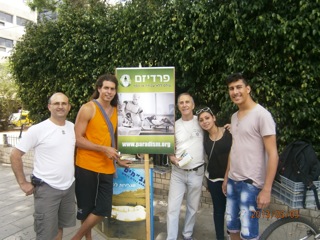 It was a beautiful day in Shenkin, We were: Roni, Adam (Nadav), Nava and I, we gave about 150 flyers, some people stopped to talk with us, everyone agrees that it will be beautiful if we can achieve it, we told them that it is our dream, and we will be glad if they will dream it with us, because some time dreams come true, of course we enjoy it very much and we miss you both.

It was almost canceled because a rain was coming but we decided to go to our "open picnic" meeting place anyway. Eliane invited Christian, a visiting French artist and business partner, and I invited Ahmad, a Palestinian sympathizer of the Raelians. No other people came on that evening.
No rain, a nice temperature and nice food prepared by Eliane in this public garden near a beautiful fountain.
We spoke about everything but also about some ideas of Paradism and we had some printed "Paradise Money" that I put in a pile under the public garden lights. At the end Christian asked "what is this?" (about the printed money) and then said "wow, interesting!" and took one to check the website. 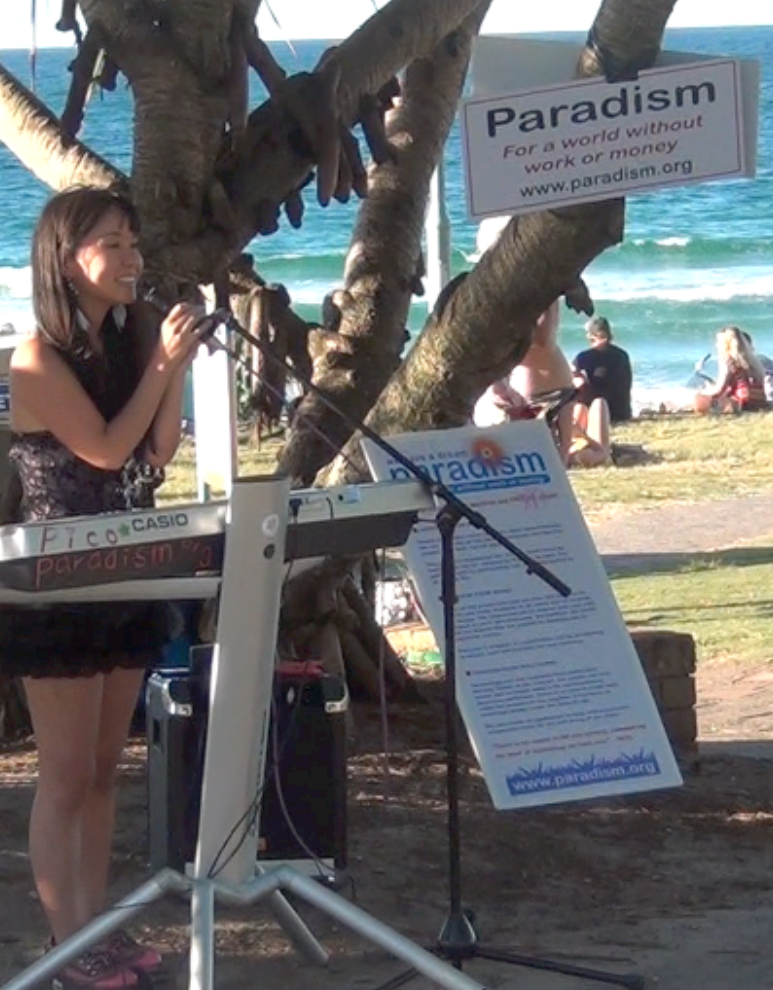 In Australia our main focus of our diffusion was on internet, however area’s were invited to do their own diffusions and gatherings in their area too.
The North Coast has the privilege of having the beautiful Pico who has written some very inspiring songs on Paradism with Jarel. 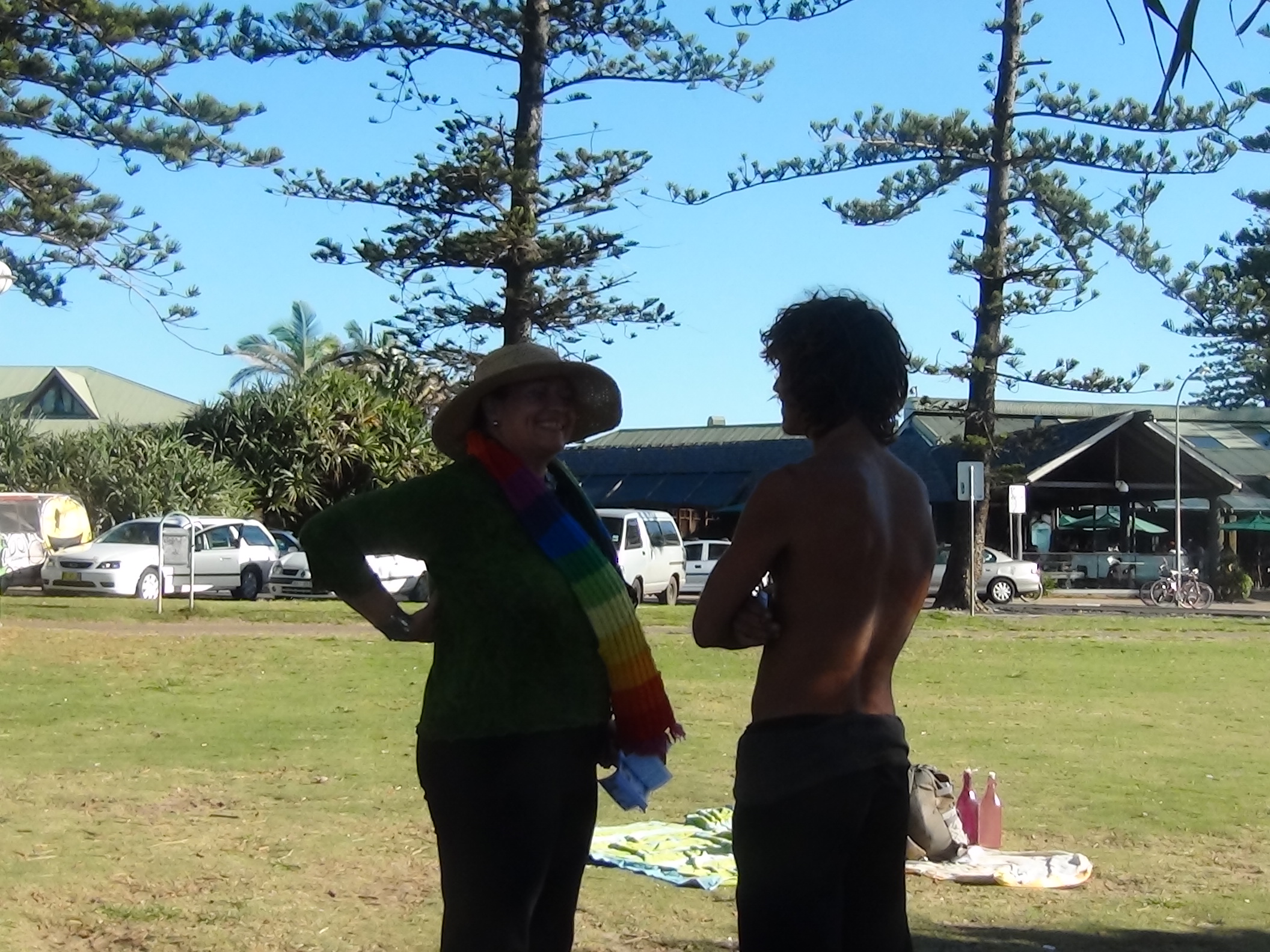 We set up our International Paradism Day Diffusion on the Byron Bay Foreshore Park which is very paradisaical, Pico set up a small stage and sung her very moving Paradism songs. There was a very touching response from passer-by’s who loved the Paradism leaflet we were handing out , and Pico's artistic performance and Paradism songs, certain individuals were so enthusiastic and excited by the coming reality of paradism for Humanity and many moving conversations were had by Alcy Jarel, Pico and myself (Tara). 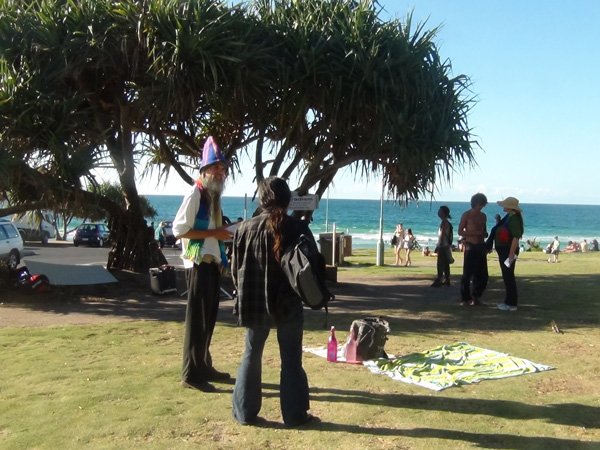 The following weekend Alcy and I, Pico and Jarel , went up to Nimbin for the Nimbin Mardi Gras, where we went to spread Paradism to this globally known centre of freedom, innovation, and free thinking. We displayed the Paradism sign in a very prominent place and continued to have many wonderful discussions and conversations on Paradism. I can’t express the thrill I had in sharing the Paradism leaflets though the crowds on the main streets of Nimbin , it really was electric ! Later this month we will attend the 40TH anniversary of the Aquarius Festival to share more with the Community the ideas and values of Paradism. It is so wonderful to be apart of this great revolution of Paradism 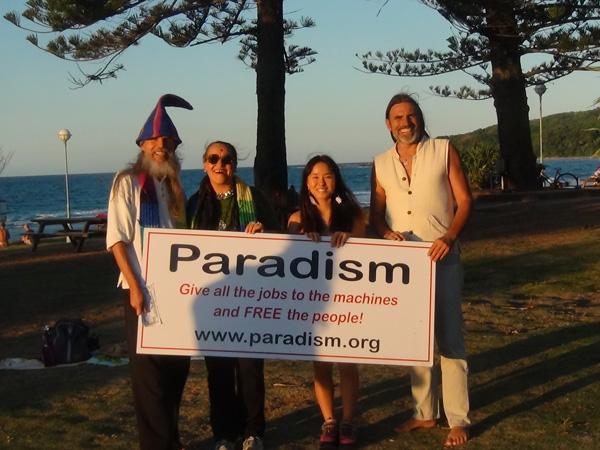